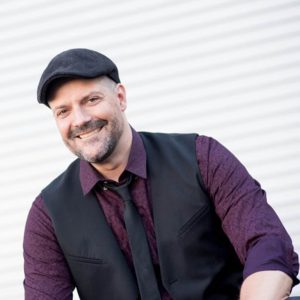 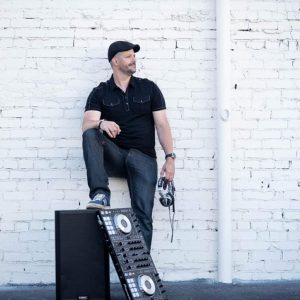 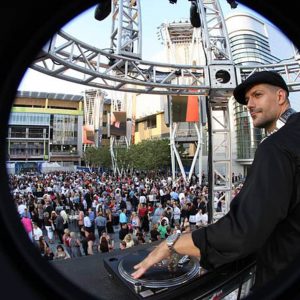 Lee’s DJ career started in his hometown of Minneapolis, Minnesota. Influenced by the eclectic & funky music that became known as the “Minneapolis sound” (Prince, Shelia E, The Time), Lee began looking for a way to express his own musical creativity and found his way to a pair of turntables.

After several years of paying dues spinning for local bars Lee was hired as the Director of Entertainment for America Live – a 60,000 square foot multi entertainment complex featuring 5 different nightclub concepts under 1 roof. Here he spent the next several years traveling the Midwest opening new properties, training DJs and managing the music format for all 5 concepts.

During this time he learned the important skill set of reading a crowd’s body language and adapting the music set to keep people happy which of course is crucial for any type of special event. His mentor taught him to appreciate how much impact the DJ/music has on the overall success of an event and how room awareness is the DJs best attribute.

Eventually Lee was recruited as the resident DJ for a chain of high profile nightclubs in South Florida. After fine tuning his craft by spinning the Miami’s hottest clubs and hosting a weekly live radio mix show, Lee was ready to move west and take the challenge of an even larger market.

DJ Lee hit the Los Angeles club scene in 2003 and quickly became one of the town’s most in-demand talents for nightclubs, lounges and all types of special events.

His ability to read a crowd and adjust the music programming accordingly is second to none and always insures that the vibe and energy in the room are on point with zen like focus & precision.

With a radio background but humble attitude he can MC any wedding or corporate event in a way that is commanding but not cheesy or obnoxious.

Lee’s music knowledge runs very deep, with a chameleon-like ability to blend any genre of music seamlessly. Lounge, House, Top 40, Rock, Funk, Soul, Latin, 80’s, Disco and Hip Hop can all be found in his mix.

**Lee won the Biz Bash “DJ of the year” award and his wedding company: Hey Mister DJ has been nominated the last 2 years in a row for California Wedding Day’s “Best of Brides” award. Hey Mister DJ has over 130 Five Star reviews on Wedding Wire/The Knot. He just released his first book “How to Hire a Killer Wedding DJ” which can be found on Amazon.

Q: Where did you grow up?

A: I grew up in St Paul, Minnesota so obviously Prince was a huge musical Influence. He provided an example of true musical diversity which became known as “open format” for the DJ world.

Q: How did you get into DJing?

A: By pure luck, timing and a little white lie.

I was hanging out with a friend who had been DJing for about 6 months and he got referred to a local bar whose DJ called in sick. So,  I tagged along and helped pick out music as I was always very musically oriented.

The Manager was so impressed that he fired the unreliable DJ and hired us both!

Q:  What do you love most about playing weddings?

I think the DJ helps find the balance between logistics (timeline) and flow so I love when the entire night feels very organic and natural…even though we worked behind the scenes minute by minute to make it appear that way.

A: Well, I have at least 3 in every genre because it always depends on what type (and age) crowd you are working with.

Lee is also an Ordained Minister in the State of California 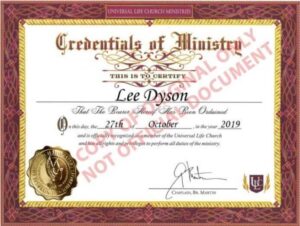 YOUR EVENT DESERVES THE BEST. INQUIRE ABOUT BOOKING LEE.